Scrapbooks. We’ve all kept them. Some are priceless mementos of things private and personal. Some are records of big news stories, earth shattering events. Some are a record of a magnificent obsession, like – say – your love for a particular actor, film, band, TV show. Mostly, these things end up in an attic somewhere, taken down years afterwards and studied with love.

In one case, a scrapbook had a most peculiar afterlife. Actor David Banks was an obsessive Man From U.N.C.L.E fan when he was a nipper. It hit him hard, and he started voraciously collecting everything he could about it. He clipped from the Radio Times. He did cutaway drawings in an exercise book of all the gadgets used by Napoleon and Ilya. He made a collage cover.

Then, presumably, into the attic it went.

In the 90s, David was at a Doctor Who convention. He was one of several people associated with the programme who was raising money for that weekend’s charity auction. He sold off his treasured U.N.C.L.E scrapbook to a very drunk idiot in the audience.

That idiot was me. I’ve treasured that scrapbook, protected it through disaster – my flat seemed oddly prone to flooding and I’ve lost count of how many things got mulched over the years. It’s gone everywhere with me, and I still protect it. I’m like some sort of Knight Templar of the U.N.C.L.E scrapbook. Years back I scanned it in order to preserve it for the ages. Never could work out how to host it anywhere. It seems I can now do it here, so I present – with love – the Cyberleader’s personal U.N.C.L.E scrapbook. I do hope you enjoy it. It’s terribly precious to me. 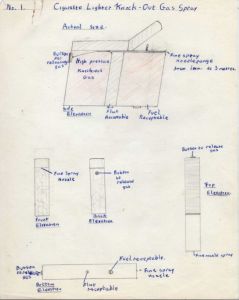 (If by any chance David sees this and wants it taken down, I’ll do so gladly. I hope if he does see it, it brings back some happy memories.) Click on the link to view.  UNCLE scrapbook