Part two of my somewhat epic review of Manhunt, by kind permission of Jon Melville at Adventures in Primetime.

Right, here we go again! I seem to be watching this series in batches of seven episodes, which makes for neatness if nothing else.

Doing so makes plain some alarming leaps about in continuity, with one major cliffhanger glossed over the next week, and some chopping and changes in characters. Rather wonderfully, the opening titles change to reflect this, so you can play a little guessing game as to which character is going to turn up this week.

Dealing with the age old problem of who-gets-top-billing? Lynch and Barkworth’s credits swap over each week more or less from this point, with each being credited first on every-other episode. Cunning, although I’d hate to think there was any backstage rivalry between those two – the chemistry onscreen is just so strong.

Following his introduction in episode nine, Robert Hardy gets two credits – initially a title card reading “As Gratz”, followed by his name emblazoned in white-on-red glory on a second card. Presumably this is to reflect the absolutely bloody seismic effect his appearance has on the series.

The initial chase, evade capture, chase a bit more format of the earliest episodes gives way to something altogether darker, more disturbing and even more intriguing than the show’s already been.

Before all that though, at least one of our intrepid heroes has some difficult questions to face as we career into episode eight – A Different Kind of War. This – unbelievably enough – is what passes for a Christmas episode in Manhunt, as Jimmy, Nina and Vincent pitch up at the house of one of Vincent’s oldest friends on Christmas Eve.

Greeted with suspicion at first by the female occupant of the house, Vincent’s name produces a surprising warmth and affection, before the introduction of Vincent’s old friend following a delayed build-up.

And no wonder, because no British drama series is complete without an appearance by good old Julian Glover, as “Paul”. Bristling with Bonhomie, hospitable to a fault, and guaranteeing a safe haven for our fugitives, Paul seems the perfect host, but before Christmas Eve is out, we’ll discover a very different man behind the facade.

This one’s a tension-builder, as first Nina, then Jimmy discover darker sides to the perfect couple they’ve landed up with. Before too long, Vincent is forced to confront his younger self and the political ideals he once held dear, and to ask himself – how far will I go to protect that for which I now stand?

Jimmy shines in this one – although events are initially set in motion by Nina, it’s Jimmy who’s the motor and Alfred Lynch… well, he walks off with the episode in his pocket. There’s a lengthy “seduction” scene – quote marks wholly appropriate, believe me – where I honestly didn’t know how Jimmy was going to react. His character, while seeming to be all gloss and gung-ho, might well be the darkest of the three.

Certainly this episode reveals a ruthless quality to him that he hasn’t really shown before. While Vincent sometimes appears to be driven entirely by his reaction to what’s happening around him, and while Nina at this point is almost totally passive, being buffeted from scene to scene with no real control over her fate (the credits even refer to her as “a parcel”), it’s Jimmy who directs things totally here. 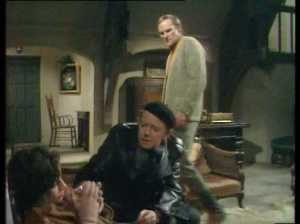 Vincent is brought face-to-face with some dark and unpleasant truths about his old friend, himself, and eventually the cause he’s fighting for.

And then… nope, not telling you. Watch it and find out for yourself, because it’s a key event that flavours everything to come. The final scene is simple, underplayed, and totally affecting.

Episode nine brings the return of an SS uniformed Philip Madoc as Lutzig. This time, however, he has a thorn in his side. A Robert Hardy shaped thorn in his side, as Abwehr Sergeant Gratz  – self-educated, self-important – saunters in and within ten minutes achieves the impossible, making The Madoc look discomfited. 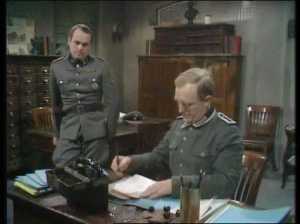 Every scene he’s in is a constant flow of erudition, verbosity, and charm which leaves the viewer feeling like a snake staring at a Mongoose. Even before he gives you proof, you can tell this man is dangerous. Following some antics in a factory being used as one end of an escape route, Gratz eventually corners Nina. Not before a rare mis-step on the part of the production team, however.

In an attempt to smuggle themselves into this potential means of escape, Nina is supposed to be part of the male workforce, and has been told to dress like a young boy. The series suddenly lurches towards ‘Allo ‘Allo territory when Nina turns up wearing overalls, no make up and a Balaclava. But still obviously, distinctively female.

My suspension of disbelief needed a considerable helping hand here, especially in the – gasp! – final moments, when Gratz removes her disguise. Honestly couldn’t tell the difference. By this point, the boys have seemingly escaped, leaving Nina in the hands of the enemy – leading to another extraordinary episode (does this series ever have an off-day? Nina’s ridiculous disguise aside, the quality bar is set astonishingly high).

With a Sort of Love is the sort of TV that I live for.  One of those television episodes where you occasionally forget to breathe. Where you find yourself wondering what the hell is going to happen, and loving the fact that you have no idea. 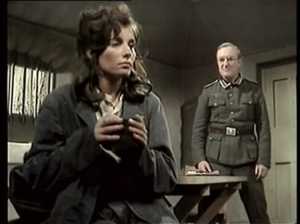 Set predominantly in an interrogation room, a camp-bed and table pretty much the only furniture, Cyd Hayman and Robert Hardy its only occupants, this would make a terribly effective stage play.

It’s certainly one of the bravest episodes of a mainstream drama I’ve seen, taking as its starting point the effect of Stockholm Syndrome on even the bravest of prisoners and applying it to Nina – a character who up to this point (one particular moment aside, as hinted at earlier) – has given us no evidence to suggest that she is capable of withstanding a sustained interrogation.

Robert Hardy’s performance in this is a masterclass, and Cyd’s not far behind him.

Beginning on a very quiet, very restrained pitch (virtually the first scene has Gratz ordering Nina to strip naked in front of him – which she does), Hardy becomes a dervish as he puts Nina through the most concentrated form of mental torture, prying at every opening in her defences, causing her to question her identity, her sense of self-worth, her belief in herself as a human being… extraordinary.

At one point, he commences a grotesque mime of a Hitlerian Ventriloquist’s dummy that’s so inappropriate to the surroundings that you find yourself laughing. So does Nina, almost involuntarily – and he’s on her – smashing her repeatedly across the face, throwing her across the table, screaming at her.

Somehow, she manages to withstand this long enough for Gratz to be seriously compromised by the episode’s B-story involving a plot to assassinate the Fuhrer.

The episode then screeches sharply round an unexpected plot twist, which again I’m not going to reveal, but about which I will say – Nina reveals an astonishing strength of character in going down a route which might just provide her with the only possible glimmer of safety she can possibly know.

But it’s a harsh decision, a pragmatic one – and it’s one which left this viewer with a feeling of almost total distaste and contempt for her. And that’s despite her heartbreaking vulnerability in the scenes immediately preceding it.

Unfortunately, these final scenes (which, incidentally, feature the only appearance of  Jimmy and Vincent in the episode – that’s two out of the three leads absent for an entire show, which gives Cyd Hayman room to show what she’s really capable of) lead into a cliffhanger  which is so vigorously unresolved in the next episode that I found myself checking to make sure I hadn’t skipped one or two in the running order.

But no – the shattering events are merely alluded to in passing, which is disappointing and makes me suspect that there may have been a midnight-hour scripting crisis.

Which leads us into the next phase of the series.

Jimmy and Vincent find themselves in the employ of a touring chanteuse – a blowsy, middle-aged diva of a woman called Adelaide. Suspected by the resistance of passing secrets to the SS, Adelaide is in fact in it for whatever she can get. She’ll sell in either direction if there’s a profit in it for her.

Vincent ends up as the piano player, earning a grudging respect from Adelaide,  Jimmy (getting the fuzzy end of the lollipop yet again) ends up having to push a bucket around and pretend to be the World War II equivalent of Benny from Crossroads. And being referred to as “Halfwit” by Adelaide.

Nina? The results of her experiences in previous episodes still reverberate, and following brief employment as a serving girl in the same nightclub the boys are working in (and let it be known that both Lutzig and Gratz patronise this place and never realise – at least at this point – that Jimmy and Vincent are The Droids They’re Looking For), she ends up heading off for an appointment with Gratz. Her jailor, her torturer, her nemesis. 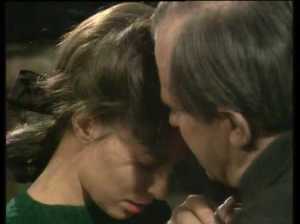 Meanwhile, Adelaide continues to bewilder and confuse, while dragging all within her orbit into her strange, slightly quizzical world. Played by The Newcomers’ Maggie Fitzgibbon with her Australian accent in full flight, Adelaide resembles a galleon in full sail in some episodes. No wonder Lutzig – who she’s supposed to be dating – looks faintly haunted everytime they’re on screen together.

Beaten to within an inch of her life for suspected “collaboration” with the enemy, stuck with one of Petain’s breed of obnoxious brats in short trousers and even smaller brains for a brother and forced into a life of unbelievable danger as she attempts to act as go-between for the resistance (the representative of this branch being George Sewell. Christ, I’m surprised Germany didn’t lie down and surrender immediately), Francine looks at the currents swirling around her, and dives straight in, saving Jimmy from a situation which almost claims both him and Vincent.

Caught in a siege situation with the enemy closing in, Vincent pulls rank on Jimmy, ordering to shoot him that he not be captured and tortured.

Showing the combination of raw nerve, common sense and competence that marks him out as a prime asset of the RAF, Jimmy botches it, delivering a badly injured Vincent into the hands of the SS.

With Nina already in a situation that could have fatal consequences for more than just her, Vincent in the stronghold of the enemy (with none but The Madoc for company) and Jimmy adrift, attempting to save “The Girl” – it looks bleak for our heroes at the halfway mark.

What’s next? See me in seven episodes time…